The Story of the Coal Valley Varmints

My sister, Cindy, has this old-timey, wild west saloon-room in her house.  When friends and family come to visit they can dress up in costumes and get their photo taken in the saloon.  She gets the clothing for the costumes from thrift shops or yard sales and alters or embellishes them to make them look like vintage dresses.  She prints the photos in sepia or black and white, puts them in antique frames and decorates the walls of her saloon with them. 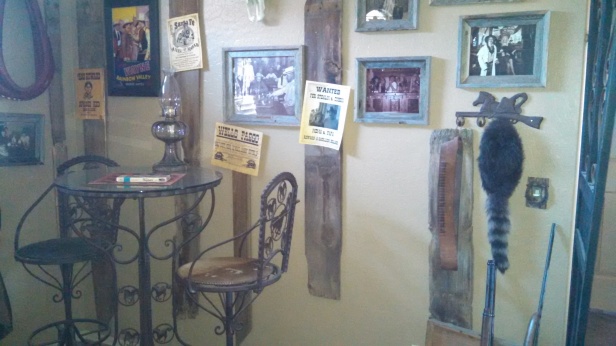 When we were kids, we grew up in the small rural town of Coal Valley.  When we would go into the city to visit our Uncle Bob he would jokingly call us the “Coal Valley Varmints”.  That was kind of the theme for our picture.  We got dressed up in our vintage-look dresses and used some of Cindy’s saloon décor as props for an authentic Wild West photo!

Cindy’s husband, Chuck, was elected to be the photographer/prop man.  He hurriedly found an extension cord for the camera phone that almost went dead right at photo time.  He rustled up props, moved furniture, sweated and learned to use three different camera phones on the fly!

Us girls drank wine, grumbled about the poor lighting, posed, argued, fussed with our hair and dresses and complained like supermodels.  We nagged Chuck for not getting our cute boots in the picture, told him to squat, told him where to stand, told him to turn the phone vertical or horizontal…  Chuck took it all in stride with a grin on his face, never complaining or walking off the job!  He is such a good sport!

At first we had no plan how we were going to pose.  Should we look like we were shooting up a saloon after robbing the Tombstone Bank of their gold?  Should we smile nicely for the camera?  Should we look like mean, bank robbers?  In the first shot we all went with whatever popped into our mind at the moment.  Cindy looks like she mighta had to use the potty!  Jennie decided to take a nap and I was just busy pretending to chug whiskey while casually holding a huge bag of stolen gold!

We looked at the pic after it was taken and realized we needed a plan.  We opted for more of a stern look for our second shot and decided to count to three so we would all be ready when Chuck snapped the pic.

Well we all looked pretty somber for some ladies holding a bag of gold!  There were some blurry spots in that shot and the lighting still wasn’t good.  Once the sepia filter was applied to the photo there was too much glare.  It wasn’t a keeper but as you can see, once you change the photo to black/white or sepia it doesn’t really matter what color your costumes are, or if they fit exactly right.  The next serious shot was a sharper image and I think the black and white color worked much better then the sepia in this photo.  Personally, I didn’t like the serious faces.

The sunlight streaming in the window at that time of day was causing a real problem.  We hated to cover the window with a blanket because it would look awful in the background of our picture.  After we whined about it for a while we realized Chuck had gone outside and was up on a ladder, hanging a tarp over the outside of the window.  (Plus he probably needed a break from us at that point!)

After that, things got kind of out of control, as they do with sisters!  It could have something to do with the amount of wine we had consumed by that point in time but we were all blurting out different poses, hollering at Chuck to turn off the flash, bitching endlessly about our cute boots not showing in the photos and basically we accomplished nothing, other than a bunch of goofy pics!

As I was putting the pictures together for this post I started thinking my sister Cindy might just be a tad crazy!  I made a mental note never to piss her off and told Chuck to make sure she doesn’t have access to any guns!  Yikes!  Those faces she makes though!  Anyone who has spent any time with Cindy knows she is a hoot!  She missed her calling as a comedienne and without her, the photos would have just been ordinary. 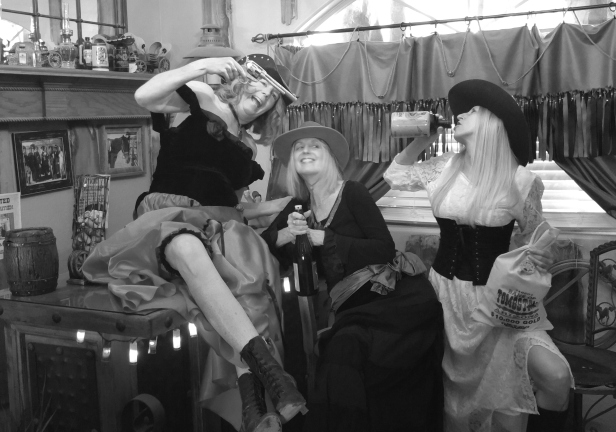 Just what was she shooting at here???

Things got even more out of control when we asked Chuck to bring a donkey inside the house to pose with us.  Yes, a real donkey named Rowdy Bill Bentley.  Bill was a little freaked out by being inside but he behaved like a perfect little gentleman!  Unfortunately most of the photos with Bill were kind of blurry and didn’t turn out very good but we sure did have fun taking the pics!

It was a fun afternoon (especially for Chuck) and we got a few really cute pics.  Chuck had to hustle Rowdy Bill Bentley back to the corral before any accidents happened in the house and I made sure all the weapons were locked up and hid the key from you-know-who!

Now this “WANTED” poster hangs on the wall in the saloon at C & C Ranch, telling the story of the Coal Valley Varmint’s big gold heist from the Tombstone Bank. 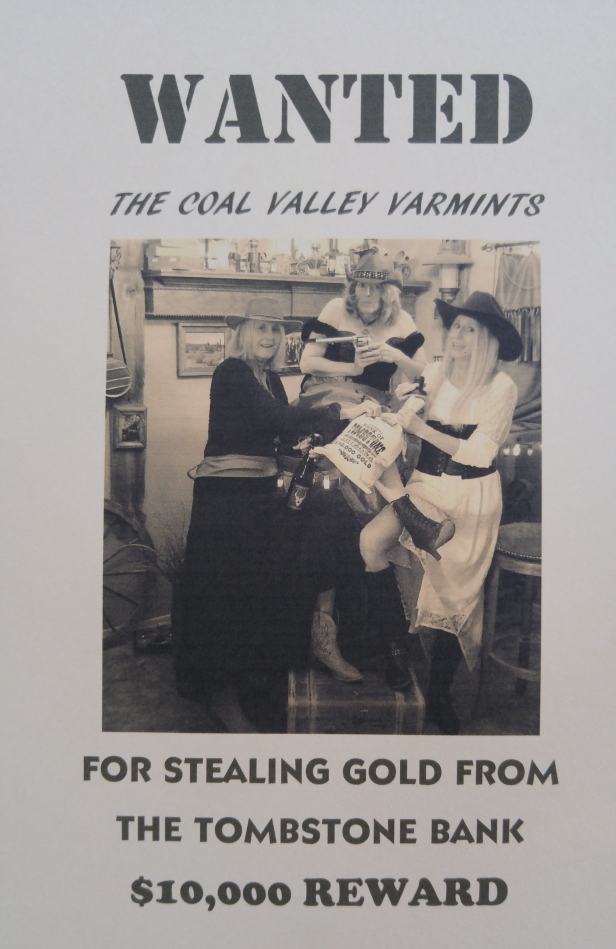 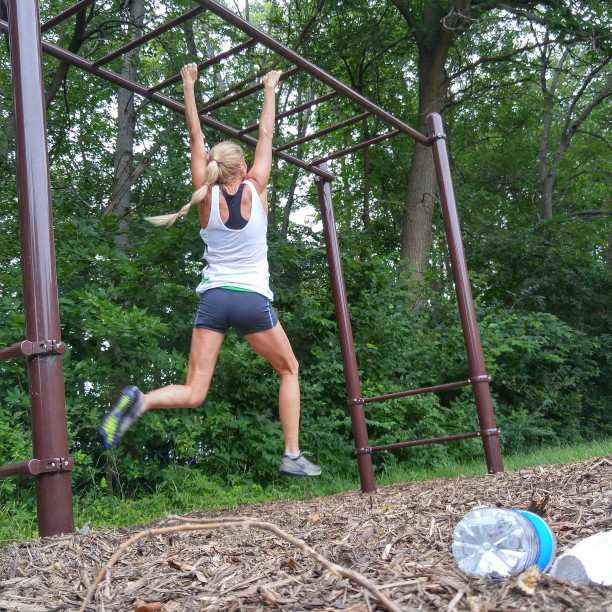 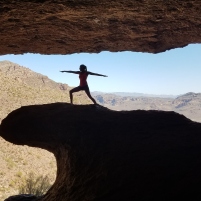 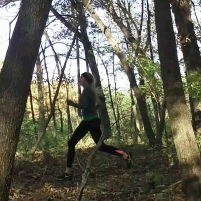 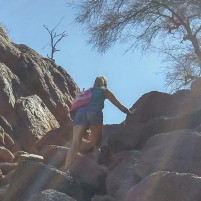